We offer Free Estimates for all new TV aerial installations in Manchester for both residential and commercial clients, and can typically attend your property within hours of your telephone call.

With Aerialforce, you don’t have to wait too long for repairmen to come to your place. Thanks to our local force in Manchester, we will try our best to fix your aerial within the same day of your call.

Relive old football games or catch them live on the Sports Channel Network, or discover a new recipe on the Food Network. TV might feel like a thing of the past, but its curated content can lead to surprising connections. Freeview is the largest digital terrestrial TV platform in the UK. It made its way to 18 million homes and continues to serve the best of what the nation has to offer. After your aerial instalment, scan your TV for main channels like ITV, BBC One, Channel 4, and the like.

Sadly, location is an essential factor. The landscape, buildings, and trees can affect your TV reception. To learn about what you can find in your area, consult Freeview’s TV guide and input your postal code. You might be pleasantly surprised at the content available.

Aerialforce have CCTV installations engineers and technicians in Manchester that are fully trained and qualified to provide the best quality workmanship and advice regarding your CCTV. Each installation we make is tailored towards your security requirements, as well as your budget and business restrictions. Rest assured that all of our equipment and materials are top of the line in quality.

Whether you are new or old to the CCTV, times are always changing. Safety and security should never be compromised. To learn more about our service you can send us an enquiry or call us via mobile for answers and a free quote. When you decide to work with us, we also offer same-day service.

Aerialforce engineers are available in Manchester to help take the stress out of your aerial, satellite, & CCTV issues

We offer a Same Day service throughout Manchester. We are able to do this as we have locally employed installers. Rest assured that all of Aerialforce’s employees have a minimum of 5 years of work experience in the Aerial and Satellite Home Entertainment Industry. To guarantee our clients’ safety, we check the criminal records of our applicants before deciding on whether we hire them or not.

Aerialforce runs nationwide with a reputation for speedy and efficient service. So in your search for a TV installer, consider us. We have all your bases covered, from free quotes to same-day service, there isn’t a feature that does not serve your interests.

Please complete the enquiry form below, and send your details to our Manchester customer service team. Once you have completed this form, one of our engineers will contact you to discuss your requirements further and to arrange a suitable appointment. 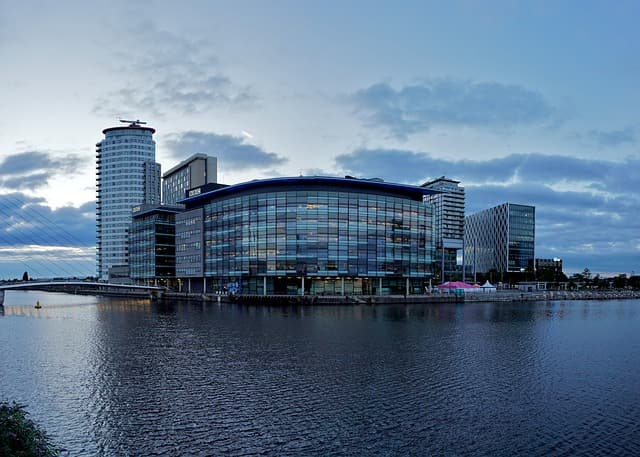 Manchester is a city and borough in Greater Manchester. It is the second most populated area. The area has an illustrious history, known for its many firsts. Manchester was the first to establish a railway that went between cities. It was the first place to split an atom, to create a stored-program computer, and isolate graphene. However, the history of the area is not just rooted in these scientific accomplishments, but also arts and culture.

UNESCO recognized Manchester as a City of Literature because of early radical writing. Mary Barton: A Tale of Manchester Life, The Condition of the Working Class in England, and A Clockwork Orange are examples of this history. Other literary giants like Charles Dickens, Charlotte Bronte, Harriet Beecher Stowe, Charles Eliot Norton have visited the home of Gaskell, which has been converted to a museum. Manchester was also home to a thriving rave scene, then dubbed Madchester, and the birthplace of many musical groups like The Smiths, New Order, The Stone Roses, and The Charlatans to name a few.

When you have your TV installed, turn it to Now 80’s. Blast those tunes and dance to the songs that shook the city in the past. Manchester has been the home to so many great people, and it will continue to inspire the locals to follow suit.